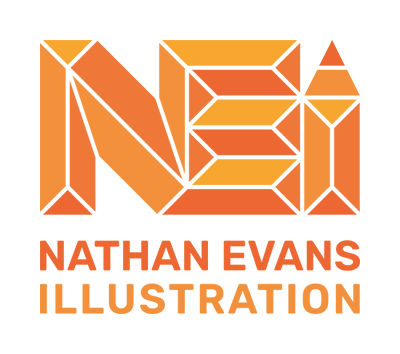 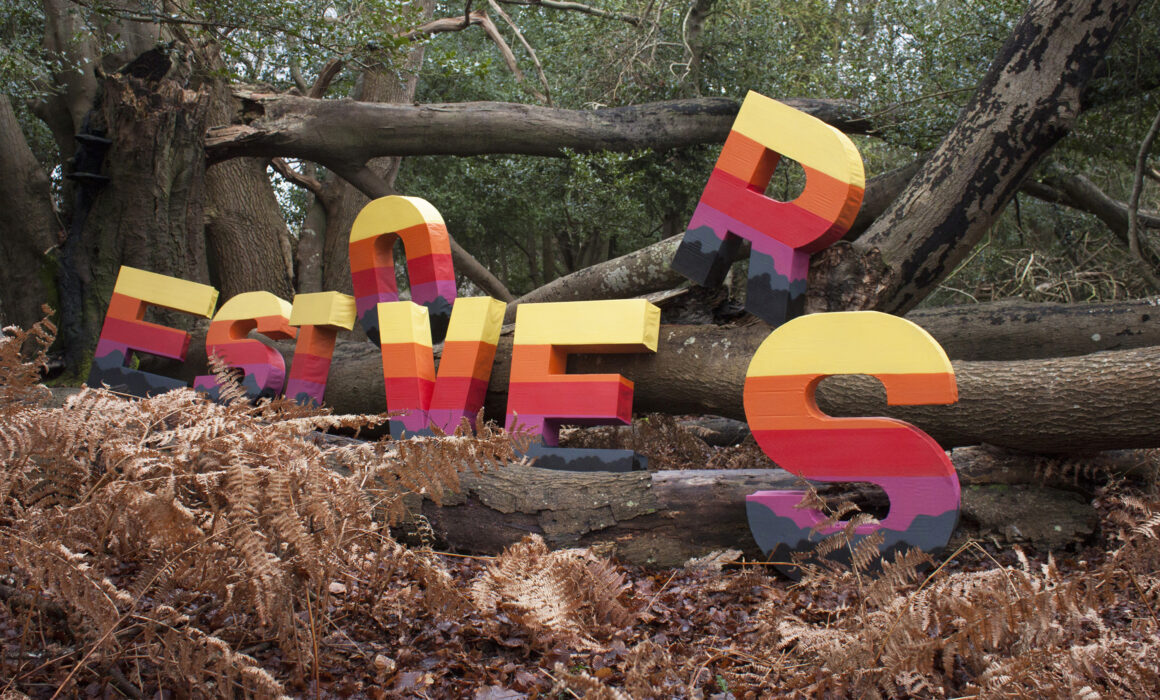 Back in September 2019 I was awarded the 2019 Talent Development bursary from ‘a space’ arts in partnership with Arts Council England. The bursary was used to develop Un-Common, a series of typographic installations investigating the tradition of commoners law within The New Forest.

When I started the project I had a number of things I wanted to achieve. I hoped to learn more about commoning in the New Forest and to explore the beautiful landscapes within the forest. I also wanted to experiment with new ways of creating work and explore transitioning my lettering into more physical and tactile three-dimensional structures. Lastly, I wanted to test how these typographical objects would occupy and interact with the environment around them and I was especially interested in the juxtaposition of these geometric objects against natural forms found in nature.

The first phase of the project was to conduct some thorough research on the New Forest. I believe that the best way to research a topic is to immerse yourself in it, so I began physically exploring different areas of the forest and identifying the various landscapes it has to offer. This ranged from thick plentiful trees, covered in beautiful green moss, to dry barren dusty open spaces. I spent countless days driving out to different locations and walking in different directions. I was exploring, looking for interesting places where I would eventually photograph my installations.

My research also involved a visit to the New Forest Heritage Centre. This mini museum is packed to the ceiling with useful information about the forest and gave me some great insight into commoning and commoners rights. As ever, I had my sketchbook in hand and took down a series of notes and sketches that I felt would feed into the work I would produce later. This visit also made me aware of the Charter of the Forest 1217, a charter signed by King Henry III that re-established rights of access to the royal forest for the common man. By this stage in the process, I had decided that I was going to use the names of some of these commoners rights as the content for my typographic installations. I settled on the words Estovers, Pannage and Pasture as the 3 rights I would explore.

The next stage of the project was to build the 3D letterforms which would make up my sculptural typography installations. This was exciting new territory for me and one of the new skills that I had hoped to explore as part of the Talent Development bursary. My method of build was a combination of different techniques I had researched online alongside some of my own ideas.

During the laborious process of hand crafting 22 cardboard letterforms that each stood approximately 3ft high, I did wonder why I had decided to go so big with the letters! However, I had always been aware that I wanted these installations to have a real impact and because everything in the forest is so huge, I wanted to make sure they didn’t get lost. Once the letterforms were all complete, I began to experiment with composing them in different ways and photographing them. This was to see how they would interact with a space and how light might interact with them as objects.

I had now successfully built the 22 letters which made up the 3 words for my installations and I could move onto another exciting part of the process for me, the painting. Unlike the building phase, the painting was certainly not new territory for me. I’ve been painting different surfaces for over a decade now, so I was really looking forward to bringing these objects to life with colour.

I wanted the visual language of each painting to reflect the meaning of the word that they adorned. This required further research into each of the 3 commoners rights I had selected; Estovers, Pannage and Pasture.

Estovers:
I wanted the design of these letters to suggest the burning of wood. This reflects the wood reserves that are collected from the forest and are then burnt as firewood.

Pannage:
I wanted the markings on these letters to reflect the markings of the pig breeds that are released into the forest each year for pannage. These breeds include Gloucestershire Old Spot, Tamworth, British Saddleback and Wessex Saddleback.

Pasture:
I wanted the painting adorning these letters to represent the different colourations that are found on the New Forest ponies in the forest. I chose to specifically focus on the ponies because these are arguably the crown jewel of the right of pasture in the New Forest.

Once the letterforms were all painted, I was now ready to introduce them into the wild!

The installation and photography phase was very challenging, but played a huge role in the explorative nature of this project. Each morning I would rise around 6am, load a word into my car and drive the letters out into one of the areas of the forest I had already identified during the research phase.

Originally I had planned to create some kind of harness contraption to carry the words on my back through the forest. However, after a few experiments it was clear that the easiest way to carry these cumbersome letterforms was in my arms. I managed to develop a system where I could carry four letters at a time, meaning for each installation I had to make two journeys from the car to the location.

It’s safe to say I had definitely miscalculated how physically challenging these installations would be. I knew that each of the photoshoots was going to be quite hard work and involve lots of trial and error. However, I had not planned for repeatedly walking over rough terrain carrying multiple letters, battling the wind and constantly pulling my wellies out of thick mud! Not to mention the looming threat of the weather, because although the letters were coated with acrylic paint, cardboard and water don’t mix! I also spent a good portion of my time propping up the letters with sticks.

Yes those days were harder than expected, but hard work is what was needed to get the job done and the New Forest is a beautiful place to work, especially early in the morning. Although it was tougher than expected, during the installation phase, I had some absolutely magical moments;

Whilst trudging through the forest at the Estovers location near Lyndhurst, I sensed that I wasn’t alone. I stopped and looked around as a herd of deer slowly moved through the trees. Their gentle graceful movements were a stark contrast to my tired bumbling shuffle. I stood there in amazement with my 4 letters in my arms as they skipped off through the bushes. The movement immediately sparked a chorus of birds to burst into song and dart in and out of the bushes. It felt surreal, like I had landed in an animated scene from Bambi. I stood for a moment as I realised that I must be the first person ever to come across a herd of deer whilst carrying a set of three dimensional letterforms. Sometimes I can’t believe what I do for work.

On another day at the Pasture location near Burley, I was lucky enough to be greeted by a team of horses. I had arrived earlier than usual that morning, there was a cold cloudy mist floating above the ground and the sun was still hiding behind the hills ready to rise. The combination of the crisp morning air and the low light of the sun meant that with each breath the horses took, a smoke like fog wrapped around their heads. I got to work tentatively composing the installations as the horses watched and the longer I stayed the more curious they became. Because of my mural work over the years I’m very comfortable creating work and exploring my ideas in the public realm surrounded by people, but this was a new kind of audience for me, a different kind of pressure.

Due to the early hours and remote locations I selected for my interventions, it was extremely rare to bump into anyone in the forest. However, I did get the odd strange look from joggers as I unloaded a massive set of colourful letters from the boot of my car and gently laid them on the ground of an empty forest car park. I had the occasional dog stumble upon me, followed by a ‘good morning’ from the owners as the confusion developed on their face.

Only a few times did these random forest meetings develop into a full conversation. The most notable was a mountain biker who saw me from afar and cycled over to see what was going on, he said the bright colours had captured his eye against the brown of the trees. We spoke about the project and what I was hoping to achieve and his positivity for the project really made the walking I had done that morning worth it. He went on to talk about his own knowledge of commoning and how his family had once had commoners rights, before moving out of the catchment area so they were no longer entitled to those rights.

Another creative experiment I carried out during the installation process was the inclusion of stop motion animation. Once I had composed the letters correctly and photographed the installations, I began the slow methodical process of moving each letter incrementally and then recapturing the scene. I wasn’t equipped with a wireless remote for the camera, so each individual frame for the animation required the full rejig of the letters and a walk back to the camera. Obviously this was quite a lengthy undertaking, but it would allow me to bring some dynamic movement to these otherwise static installations.

The Un-Common project gave me the opportunity to learn more about the New Forest and to explore the amazing natural landscapes it has to offer. Most importantly, the project allowed me to experiment with new ways of creating work and to explore new ideas that I’ve been wanting to develop for a long time. The process of building the temporary three-dimensional letterforms was my first solid step into the 3D realm. My overall goal is that this will eventually lead to the creation of some more permanent and long lasting sculptural works. This has already started to happen and I’m currently developing an exciting new project where this dream will start to be realised…

You can see the final installations produced for the project here:
Un-Common Typography Installations


Thank you to A Space Arts for selecting me to be part of their Talent Development programme and for all of their help throughout the Un-Common project.

Want to work together to bring beautiful visuals to your next project?